Quotes For Veterans To Recognize Sacrifice Every Day Of The Year

While the country comes together every Veteran’s Day to formally honor the men and women who have served in the military, the sacrifices involved with being a service member should be acknowledged and respected every day of the year. Past and present soldiers, airmen, seamen, marines, and our newest guardians with the U.S. Space Force have chosen to put service before self no matter their rank or position. In times of both peace and war, these quotes for veterans are reminders that all service comes with sacrifice.

To be a veteran is to know what it means to put your country’s needs before your own. From the country’s very first wars to today’s battles and conflicts, progress has only been made thanks to those who serve. Regardless of how many years they donned a uniform, every veteran deserves respect more than one day a year. Not matter what day it is, these quotes for veterans are always relevant and worth repeating. Here are 30 quotes for veterans that honor both sacrifice and service.

1. “My heroes are those who risk their lives every day to protect our world and make it a better place—police, firefighters, and members of our armed forces.” — Sidney Sheldon

2. “The brave men, living and dead, who struggled here have consecrated it far above our poor power to add or detract. The world will little note, nor long remember, what we say here, but it can never forget what they did here.” — Abraham Lincoln

4. “The willingness of America’s veterans to sacrifice for our country has earned them our lasting gratitude.” — Jeff Miller 5. “It’s about how we treat our veterans every single day of the year. It’s about making sure they have the care they need and the benefits that they’ve earned when they come home. It’s about serving all of you as well as you’ve served the United States of America.” — Barack Obama

6. “This nation will remain the land of the free only so long as it is the home of the brave.” — Elmer Davis

7. “America’s veterans embody the ideals upon which America was founded more than 229 years ago.” — Steve Buyer 8. “As we express our gratitude, we must never forget that the highest appreciation is not to utter words, but to live by them.” — John F. Kennedy

9. “A hero is someone who has given his or her life to something bigger than oneself.” — Joseph Campbell

10. “Peace has victories, but it takes brave men and women to win them.” — Ralph Waldo Emerson

11. “The soldier above all others prays for peace, for it is the soldier who must suffer and bear the deepest wounds and scars of war.” — Douglas MacArthur

12. “Caring for veterans shouldn’t be a partisan issue. It should be an American one.” — Jennifer Granholm 13. “The veterans of our military services have put their lives on the line to protect the freedoms that we enjoy. They have dedicated their lives to their country and deserve to be recognized for their commitment.” — Judd Gregg

14. “In war, there are no unwounded soldiers.” — Jose Narosky

15. “The battle, sir, is not the strong alone; it is to the vigilant, the active, the brave.” — Patrick Henry

16. “I think there is one higher office than the president, and I would call that patriot.” — Gary Hart

17. “Duty, honor, country. Those three hallowed words reverently dictate what you ought to be, what you can be, what you will be.” — Douglas MacArthur

18. “A hero is someone who understands the responsibility that comes with his freedom.” — Bob Dylan 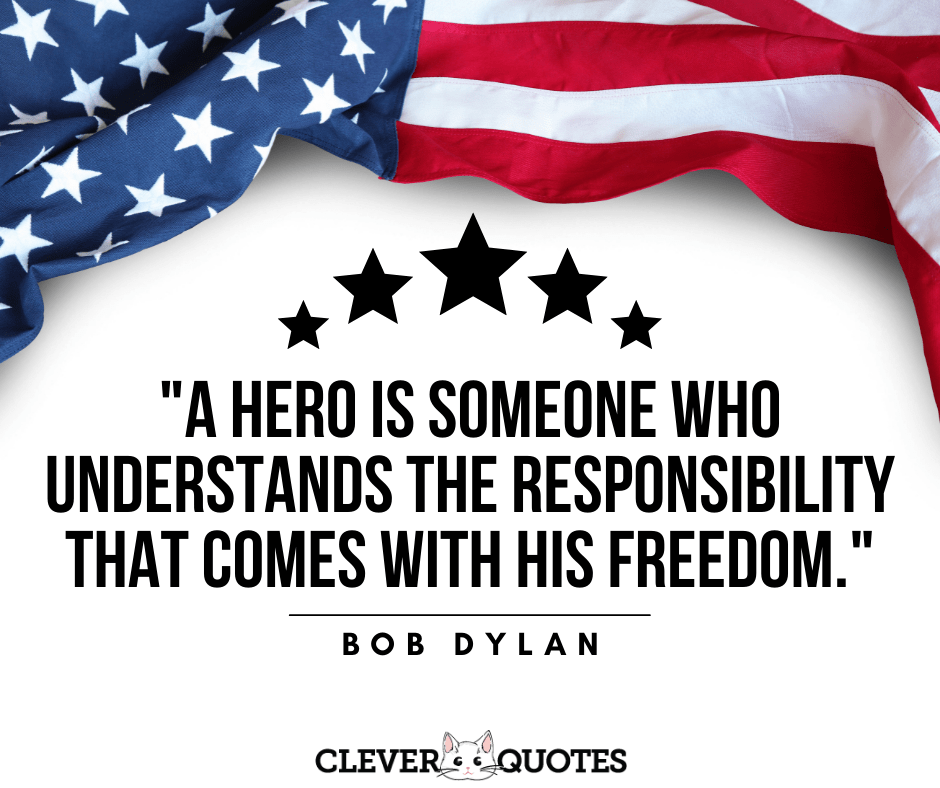 19. “We recognize and celebrate the heroes of all of our veterans, we shall forever be grateful. You inspire and encourage us, your unselfishness, your courage, and your willingness to protect our freedom – no words can express our thanks.” — Kate Summers

20. “This country has not seen and probably will never know the true level of sacrifice of our veterans.” — Thomas M. Smith

22. “Bravery is the capacity to perform properly even when scared to death.” — Gen. Omar Bradley 23. “A true soldier fights not because he hates what is in front of him, but because he loves what is behind him.” — G.K. Chesterton

24. “We sleep peaceably in our beds at night only because rough men stand ready to do violence on our behalf.” — George Orwell

25. “The only thing that makes battle psychologically tolerable is the brotherhood among soldiers. You need each other to get by.” — Sebastian Junger

27. “Soldiers, when committed to a task, can’t compromise. It’s unrelenting devotion to the standards of duty and courage, absolute loyalty to others, not letting the task go until it’s been done.” — John Keegan

28. “America’s veterans have served their country with the belief that democracy and freedom are ideals to be upheld around the world.” — John Doolittle 29. “The U.S. military is us. There is no truer representation of a country than the people that it sends into the field to fight for it. The people who wear our uniform and carry our rifles into combat are our kids, and our job is to support them, because they’re protecting us.” — Tom Clancy

It doesn’t matter what branch they served in, what rank they reached, or whether there was war or peace; every veteran is worthy of recognition. Share these quotes for veterans to celebrate the past and present service members in your life.